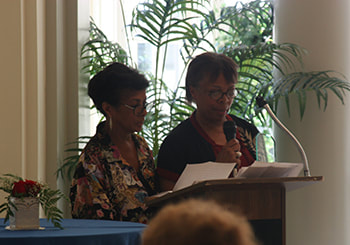 ​Carolyn, internationally recognized as an iconic interpreter of master choreographer Paul Taylor, followed her performing career with faculty positions at City College, The Juilliard School, and The Ailey School, and has received national awards for her contributions to the field. Julie, a vanguard in dance education and research, founded Brown University’s dance program in 1969, transforming it from a recreational activity to a full academic program with professional-level experience and exposure, and from 1971-80 was artistic director of the Rhode Island Dance Repertory Company. In 1973, along with their parents Julius J. and Olive A. Adams, the sisters established The Harlem Dance Foundation, to "nurture an endangered art form in an endangered community." Over the course of 20 years, the Foundation produced performances and events and developed arts education programs both at the studio and in communities throughout the Northeast. In 1989, Carolyn and Julie began directing the New York State Summer School of the Arts School of Dance, a pre-professional intensive for high school students.

​In these various settings, Carolyn and Julie led activities aimed at integrating dance across the generations, between the dance field and broader population, and into educational curricula. Their basic philosophy has always been that modern dance—a quintessential American art form and the least known or appreciated of all the arts—has the potential to provide all people with kinesthetic and historical knowledge and understanding of the evolving American culture. 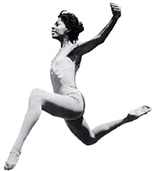 ​By the onset of the 1990s, what emerged was a shared, deeply integrated and visionary understanding of the challenges and opportunities inherent in dance’s relationship with the wider American culture, and they began to recognize obstacles that were impeding the teaching, performing, and sharing of the American dance legacy. In 1992, the sisters began developing Repertory Etudes to address those challenges and established the American Dance Legacy Institute (later Initiative) at Brown University the following year. Building from the institutional base at Brown, Carolyn and Julie worked for over 25 years in connection with a network of collaborators and their affiliated organizations—New York State Summer School of the Arts, The Harlem Dance Foundation, City College, and The Juilliard School—to launch and disseminate Repertory Etudes, revolutionizing how people teach, learn, and view dance. 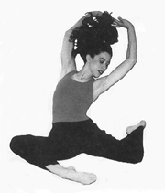 ​In 2003, after 10 years of Repertory Etudes development and initial programming, Laura Bennett (Julie's daughter and Carolyn's niece) created the Dancing Legacy Ensemble as the primary vehicle for performing and teaching the Repertory Etudes. The repertory has grown beyond the RepEtudes and the Ensemble has spearheaded the development of a unique and adaptable teaching methodology that emphasizes thoughtful and dynamic ways to pass on dances while ensuring those works are taught, performed, and shared authentically.
In 2019, Dancing Legacy became its own independent entity, expanding its activities beyond the Ensemble and establishing Fusionworks Studio as a physical home. Through ongoing programming and collaborative projects, Dancing Legacy will continue to build on the Adams sisters' work, transforming how people think about and experience the evolving American dance legacy.