Lauren Hale Biniaris is a New York City-based dance artist, yoga instructor, writing teacher, and poet. She attended Brown University as an undergraduate and holds an MFA in dance from NYU's Tisch School of the Arts. Lauren has performed, taught, and presented work in museums, schools, theaters, and various venues throughout the country. Her work values collaboration, exploration, depth, and accessibility, and Lauren places as much importance on creative process as she does on finished product. When she is not working, Lauren enjoys hiking, growing her own food, and playing outside with her husband and two young daughters.

Becka Vargus Katz, dancer and dance teaching artist, has performed with Taylor 2, Maffei Dance Company, Avodah Dance Ensemble, Martita Goshen’s Earthworks, Vencl Dance Trio, Lincoln Center’s Little Orchestra, June Finch, and Sue Hogan, among others. She has toured throughout the United States, Europe, and India and was featured in the off-Broadway production of Phenomenon with Alyse Rothman’s Nerve Ensemble. Becka has been involved with the American Dance Legacy Initiative since its inception, has performed in many of the ADLI's Repertory Etudes, and danced the role of the Bride in ADLI's film reconstruction of Sophie Maslow’s The Village I Knew. Becka graduated cum laude from Brown University, where she created and designed her own major in “Artistic Expression and Child Development,” and received the Susan Ross Steinfield prize for excellence in the performing arts. She has always been passionate about sharing her love of dance with young students. Becka was on the faculty of Ballet Academy East for over ten years, has been a dance teaching artist for Lincoln Center Education since 2007, and is a Children’s Ballet Mistress for Dances Patrelle. This year she has been very excited to join The Juilliard School’s Global K-12 team as a Dance Curriculum Specialist.

A native of Albuquerque, New Mexico, lisa nevada is a curious and avid dance artist, influenced by modern dance techniques, improvisation, theatre, and environmental/social justice. Within the last year her choreography has been commissioned by Tricklock Company, 24 Hours of Art (ABQ), Radical Evolution (NYC), Santa Fe University of Art and Design, Buran Theatre (NYC), and 516 Arts. In 2014, lisa was named the Valle de Oro National Wildlife Refuge Performance Artist and this fall she will premiere a new site-specific work in the fields and Bosque of the refuge to celebrate 516 Arts, DECADE. Additionally, lisa will premiere a new work for the inaugural SHIFT | DANCE Festival 2016 in Albuquerque. She holds an MFA in dance from the University of New Mexico (2015), where her relationship with ADLI began. Thanks to Mary Anne Newhall, the astounding UNM dance program and ADLI, lisa has had the great fortune of learning and performing many of ADLI’s historic Repertory Etudes. lisa is also a founding member and co-director of SHIFT | DANCE, and choreographer, dancer, and artistic director for lisa nevada dance.

Meggi Sweeney Smith is originally from Carrollton, Missouri and currently resides in Brooklyn, New York. She began dancing at the age of 10 in her hometown studio and was introduced to modern, historic, and global dance forms during her time at the University of Kansas, where she received highest honors for her BFA in dance and minor in music. In 2015, she completed her MA in dance education from New York University (NYU) Steinhardt, developing her thesis Teaching Artistry Through Historic Modern Forms of Dance: Humphrey, Limón, and Sokolow. She has performed with companies such as the New York Baroque Dance Company, Sokolow Dance/Theater Ensemble, Cohen/Suzeau, and CorbinDances. Performing their work and work by artists such as Wally Cardona, Douglas Dunn, José Limón, Kate Skarpetowska, and Nellie Van Bommel, continually inspires her own investigations and teaching. Meggi teaches as an adjunct professor at NYU and William Paterson University. She continues her own training and research in modern, baroque dance, East Indian and many more styles in open classes and workshops, and in her family living room, dancing with her son to Hello Dolly. Meggi dances to connect (to people, cultures, different times), share, and encourage growth both in others and herself. When not dancing, Meggi loves to draw murals in soft pastel.

Heidi Sperounis, originally from Massachusetts, has been dancing since she could walk, at her mother’s dance studio and with The Boston Ballet and the North Shore Civic Ballet Company. She is a cum laude graduate of the University of Massachusetts, Amherst, with a BFA degree in dance. Heidi has been living in Florida since 1991. After dancing in Miami with Dance Wave—The Art of Human Movement, directed by Gary Lund, she began teaching in the Palm Beach County Community. Since 1997, she has been a full-time faculty member in the dance department at Bak Middle School of the Arts in West Palm Beach, Florida, teaching modern and ballet. This will be ADLI's ninth year in residence with Bak and it has been a great opportunity for the students to be enriched with ADLI’s RepEtudes, rich history, and legacy of American modern dance choreographers. When not dancing, Heidi enjoys spending time with her husband and being outside, and she loves a good workout! 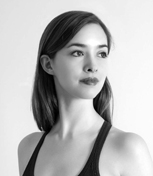 Katie Wilson is an NYC-based dancer, administrator, and Pilates instructor. She loves how all movement technique overlaps and enjoys investigating those places. She takes to heart the creed of jazz maestro Luigi: “Never Stop Moving.” A Skidmore College graduate, Katie completed the José Limón Dance Foundation’s Professional Studies Program, during which she fell for the Limón technique but never quite recovered. She still works in the Foundation’s office, geeking out in the archives and sneaking away for class. Katie has performed works by the historical greats Isadora Duncan, Doris Humphrey, and José Limón, as well as contemporary choreographers Kathryn Alter, Robert Battle, Brian Brooks, Alex Ketley, and Ohad Naharin. Most recently, Katie danced in the first season of Born Dancing Inc., a company which focuses on the education and inclusion of students with disabilities. In addition to her 20 year dance habit, Katie is hopelessly addicted to books and cookies.